Monsters, deranged spawns of warpspace, inhabit the drifting, derelict spaceship. As a Space Marine of the Imperial Fists Legion, it is my duty to defend and save mankind. Destroy or be destroyed! These servants of Chaos are formidable creatures of flesh and metal. They have no souls, have no need for rest. Twisted by hatred and malice, they are without reason or mercy. They are many, and we are few. Inside a docking pod streaking towards the derelict, I listen to my commander and check my weapons and armor. I am certain of one thing. We will prevail. We must.

Space Crusade: A Classic Introduction to the Warhammer 40,000 Universe

Space Crusade is a simplified board game born from the Warhammer 40000 gaming universe. Designed for beginners of all ages by Milton Bradley and Games Workshop, its most appealing features are its open play, balanced combat, and rules that don’t get in the way of mayhem and carnage.

This classic game doesn’t rely on a roll of the dice to inject tension and a touch of unpredictability. That’s the Alien’s job. Four players make for the best gaming experience. One player is assigned to be the Alien who controls and commands all the Chaos monsters aboard the abandoned space hulk. The three other players command a squad of four space marines representing three legions: Imperial Fists, Ultramarines, and the Blood Angels. Each legion has its strengths, weaknesses, and unique specializations.

All players agree on the primary and secondary missions before the game begins. Disabling the ship’s defense shields can be the mission for all squads. A secondary mission, like destroying the command center, can be assigned to one of the three squads.

With one life to sacrifice for the defense of mankind, each squad had best be armed to the teeth. Each commander outfits their squad with armor and weapons. Weapons include laser cannons, Melta bombs, photon grenades, bolt targeters, missile launchers, and plasma guns. Commanders can use power axes, power swords, and heavy bolters.

The nature of the weapon, heavy or light, defines how far a Marine can move. A Marine with an assault cannon can move four spaces, but another with a bolt pistol can move six. The exception is the Imperial Fists squad, specialized in heavy weapons. They can move six spaces with any weapon.

Space Crusade has a points system that can be used to determine the winner, earn rank promotions, and collect badges or awards. Players gain points by eliminating monsters and completing missions.

Once the Space Marines are through the blast doors and aboard the hulk, the squads are on their own to accomplish their assigned missions. Commanders decide which rooms to investigate and which to skip. They decide how to get around the ship and when to coordinate actions with other squads. Neither game cards nor dice rolls force players into specific choices. Cards do not dictate the pace of the game.

This abstract approach gives players a lot of choices. For an adrenaline rush, forget strategy and simply blast every creature that gets in your way. Meet the Dreadnought and take your chances in a wild melee. For cool masterminds, link missions to create a campaign. Deploy forces with methodical purpose, gathering points, and toughening up squads before facing off against the Dreadnought.

In Chess, the movement of every piece is rigidly enforced. A bishop may only move in a diagonal direction. A king may elect to take any direction but can only move one space at a time. Marines and monsters can move four to six steps in any direction. Drawn cards can add extra turns or moves.

This uncontrolled mobility considerably improves game experience and replayability. On one turn, marines are attacking a pack of Gretchins. On the next turn, they are retreating down a hallway, firing blindly at shrieking Genestealers getting closer with every dice throw. Think Alien meets Starship Troopers.

Monsters and obstacles are represented as flat tokens or blips. One side of the blip has a token symbol, and the other side has the actual monster’s icon along with its point value. The Alien player can choose a random method or a devious path.

If the Alien is a devotee of micromanagement, then they will know exactly what monsters are under what blips. Placement of monsters is a strategic gambit intended for a bit of shock and awe.

If the Alien commander is a true agent of chaos, they will shuffle the blips, taking care not to see what monsters lie beneath. The blips will be randomly placed in rooms and quadrants, so the Alien will be just as surprised as the Marines. The Alien will have to think quickly about their own combat options.

Only when a Space Marine enters a room or a quadrant on the board will the Alien player place blips token side up. Blips in the line of sight of a Marine are flipped over. Blips blocked by doors, walls, corners in the corridor, or even other monsters, remain unrevealed. Holy hidden hazards, Marine!

Rolling for Your Life

Rolls can come fast and furious in the heat of combat or a rollicking retreat. Dice rolls determine wounds, kills, and hits. Bad roll – an entire squad fallen to a Chaos Marine’s missile launcher. A Commander taking down the first wave of Orks with his power sword is an awesome roll.

Marines can opt for ranged combat or hand-to-hand combat. The Blood Angels have a built-in advantage in hand-to-hand melees. Masters of all weaponry, the Ultramarines prefer to use their entire arsenal.

Combat is unencumbered by too many rules and conditions. See a monster, shoot! See a horde, take cover and prep a grenade! See the Dreadnought, pray! Retreating to the dock will force players to assess points, award badges, and rise in rank. The player with the most points wins, and that includes the Alien player.

On paper, the Alien commander has the advantage of endless monsters to throw at the Ultramarines, Blood Angels, and Imperial Fists legions. But Marine commanders do have six lives to their squad’s one life each. With some luck and meticulous thinking under fire, commanders can emerge victorious.

If a game deserves its own business card, it would be “Space Crusade – Retro Adventure Classic.” Unlike other classic board games, Space Crusade has not been modernized and reissued. It has been out of print for some time. Space Hulk, Space Crusade’s bigger cousin, has more complicated rules and puzzles for strategic gamers.

Issued in 1990, Space Crusade doesn’t have gorgeous graphics or an original storyline. It does have high replay value and the rare ability to tickle the imagination, stirring up emotions of fear and anticipation. Space Crusade is the perfect vehicle to lead players into the rich Warhammer universe. 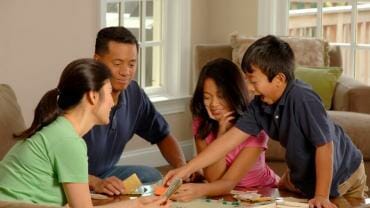