Does he like you, or is he just being friendly? You’ve probably asked yourself this over that guy who has been bumping into you constantly at work. In any other setting, it would not be that hard to tell when a guy likes you. If he always makes an effort to be around you, then it’s rather obvious.

The workplace is a little bit trickier. He’s there because, well, he works there. He talks to you often, but don’t coworkers talk all the time? Maybe he finds you a little more interesting than the rest, or perhaps he actually likes you. How can you tell?

Signs a Male Coworker is Into You

Once you notice a particular guy at work is showing some attention, you instantly wonder if there could be more to it, especially if you’re single. You don’t want to put your hopes up only to turn out that he was just friendly. On the other hand, you may miss the signs and end up losing a potentially good relationship.

Remember, in learning to tell if a guy likes you at work, your intuition also counts. There’s that sixth sense that tells you to go for it or not. Women are especially gifted with strong instincts. In most cases, they’re right. Let’s first determine if he actually likes you. Here are sure signs to look out for:

He’ll be looking in your direction every so often. At first, the glances will be brief, and he’ll look away as soon as your eyes meet. Gradually, he’ll get braver. He’ll hold the gaze for longer. Not only is he staring at you, but he also wants you to know it. He’ll ignore whatever is going on to ogle at you. He’s infatuated and can’t keep his eyes off you.

Constantly Talking to You

A guy who is interested in you will take every opportunity to strike up a conversation. He’ll pass by your desk and continuously show up around you. He’ll find a way to sit next to you in meetings. Or is it a coincidence that you’ve found him in the next seat for three meetings in a row? It’s unlikely. All this while he’ll be starting conversations, and often complementing you.

At first, he’ll talk about the usual work stuff. He’ll even be asking unnecessary questions. You know everyone received that memo, but he’ll ask about it anyway to get you talking.

With time, the topics of discussion will get more personal. He’ll want to know your thoughts and opinions on various issues. If he’s trying to find out the kind of person you are, he’s definitely interested.

Is he always offering to help, even when you were not aware that you need help? You’ll be preparing a report, and he’ll point out this advanced software that you can use to make your work easier and even offer to install it for you. He’s always at hand to fetch your coffee, run a photocopy, fetch your mail, or even cover your shift.

He’ll extend to you favors even before you ask. And he’ll let you know that you can always depend on him. He’s keen to portray himself as a reliable person. We’re naturally drawn to people who help us. And with this, he’ll be hoping to set himself apart from the rest and get you interested.

His body language is also telling during such conversations. He’ll lean in even when it’s not really necessary. He’ll smile a lot and hold eye contact. In sharing his life details, he’ll be hoping that you’ll do the same. In sharing the particulars of your life, you draw closer.

Trying to Find Out If You’re Single

If you’re in one of those complicated relationships, he’ll probe further. He won’t let it slide. He wants to know exactly where you stand so he can gauge his chances. Remember, being in a relationship is not a guarantee that he’ll back off. He’ll keep enquiring about how your boyfriend treats you, and hinting that he can do better. Are you ready to entertain such attention? That’s up to you.

Pursuing You Past the Workplace

The chatting continues past the office walls. He could ask you for your number or pick it from a common forum such as a WhatsApp group. He’ll be interested in knowing what you’re up to. And he’ll remember the details, which is unusual for guys.

You’ll casually mention that you’ll be attending a family dinner at your grandma’s, which should mean that you’re unavailable for the weekend. But he’ll still call you afterward, asking how the dinner went, wanting to know all the details. He’ll also invite you out after work, or offer to come where you are. He’ll attend events he usually wouldn’t be interested in just to spend some time with you.

Against the Idea of Leaving

Should you mention the idea of leaving, he’ll instantly discourage it. How else will he see you almost every day? If you’re dissatisfied with your job, he’ll try to help you find ways to cope. He’s your problem solver, remember? He’ll bring out the job’s positive aspects and do his best to convince you that things are not that bad.

Once you figure out that this guy actually likes you, what next? It is exciting and a bit flattering that of all the ladies in the office, this particular guy chose you. Before going any further, you may want to check on your company’s workplace dating policy, if any. You don’t want to have to choose between your job and your relationship. Otherwise, you could just have met your soulmate.

On the other hand, keep in mind that a guy could like you and still not be interested in a relationship. You need to make things clear as you go along. If he’s only looking for some romance, you need to decide if it’s worth your time and emotions. Some women actually don’t mind short-term flings. But the intentions need to be made clear from the start.

Remember, if things turn sour, it will gravely affect your work environment. Should the relationship not work, or should you discover too late that he was not interested in a relationship, what happens then? You could find yourself nursing a broken heart while he’s going after your new workmate. Is there anything more distressful than having an ex at your workplace?

This should not discourage you, but keep in mind that workplace relationships can go either way. Can you still focus on your job, no matter the outcome? Consider the pros and cons before you take the plunge. 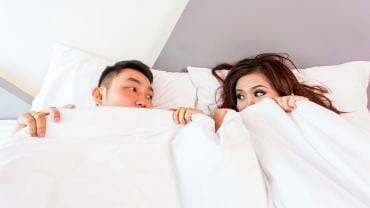